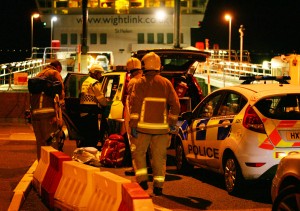 The mezzanine deck of the Wightlink car ferry ‘St Helen’ collapsed whilst unloading, resulting in 4 injuries and the launch of a Maritime Accident Investigation Board report.

Darren was the first photographer/reporter on scene and captured the moments emergency services arrived and began working to treat the injured and free those trapped inside their vehicles on the collapse deck.

The photographs were used by The Sun, Daily Mail, Metro and ITV Meridian.